On Sunday, March 6, shortly after half past ten local time, extended areas of Austria, Bavaria, and southwestern Bohemia were illuminated by a bright fireball. In particular, the inhabitants of Bavaria, where the skies were mostly clear, were stunned by the luminous and sonic effects of the fireball. In other areas the observations were complicated by cloudiness covering much of central Europe. Nevertheless, also in the Czech Republic, especially in Bohemia, there were partly clear skies at some places. The instrumental records provided by the cameras of the Czech part of the European Fireball Network were crucial for the explanation of this rare natural event. The cameras at six sites photographed the event at least partly. Thanks to these records, the fireball could be rigorously described and also the fall area of meteorites could be computed. It is a big success that shortly after sending this information to the German colleagues, the first meteorites were recovered by a German/Austrian team led by D. Heinlein exactly in the predicted location for given meteorite mass. This event therefore fall into the rare category of meteorites “with pedigree”, i.e. meteorites with known trajectory and pre-impact heliocentric orbit.

The fireball was at least partly recorded by automatic digital all-sky fireball cameras at Czech stations Churáňov, Kocelovice, Kunžak, Ondřejov, Růžová and Svratouch. These stations are part of the European Fireball Network, which covers central Europe and has the headquarters at the Astronomical Institute of the Czech Academy of Sciences in Ondřejov. Figure 1 shows the fireball recorded low over the SSW horizon by the camera located at the station of the Czech Hydrometeorological Institute in Kocelovice. The interruptions of the luminous path of the fireball are caused by an electronic shutter. They enable us to determine the velocity and atmospheric deceleration of the fireball. Although the fireball was outside Czech territory and relatively distant from the cameras (125 – 320 km), the photographic records and the precise light curve from photometers, which are also parts of the cameras, made possible to determine all parameters of the atmospheric passage with very good precision. In addition, a digital photographic spectrum of the fireball containing 60 spectral lines was obtained at the Kunžak station in southern Bohemia. Only one recorded meteorite fall has a more detailed spectrum – the Benešov meteorite fall of May 7, 1991. The fireball was photographed also at several places in Austria and Germany but these records were not suitable for the determination of trajectory and velocity.

What exactly happened on Sunday, March 6, over Austria and Bavaria?

At 21:36:51 universal time (22:36:51 local time), relatively large meteoroid of mass of about 600 kg and size about 70 cm entered the terrestrial atmosphere and started to weakly radiate at a height of 86 km near the city of Mattighofen in Upper Austria. Thanks to the steep trajectory with the slope of 70 degrees to the surface, the brightness increased rapidly and reached magnitude –15.5 in maximum (recomputed to the distance of 100 km), i.e. many times more than that of the full Moon. The body entered the atmosphere with a speed of 14 km/s and continued the flight almost exactly in the northern direction, subject to deceleration and also fragmentation. The luminous trajectory was 72 km long and lasted for 5.5 seconds. The projection of the atmospheric trajectory to the surface is plotted in Fig. 2 and is relatively short because of the steep trajectory. Thanks to the low speed, steep trajectory, large initial mass, and sufficient strength of the material, the fireball ceased to radiate at a relatively low height of 17.6 km to the east from the town Braunau am Inn, exactly on the Austrian-German border, formed here by the river of Inn. Such a deep penetration is rare, which is demonstrated by the fact that such a low terminal height was observed only exceptionally during several decades of our systematic observations. It also means that meteorite fall certainly occurred. Since there were several conspicuous flares along the fireball trajectory, representing fragmentation events, it is obvious that large number of fragments of masses from grams to kilograms reached the surface. The fall area lies mostly on German territory, to the north of Inn river, between towns Stubenberg on the west and Ering on the east (see Fig. 3).  Small fragments are expected in the eastern part of the fall area and fragment mass will increase toward west and northwest. The largest fragments are expected to be located in the forest east of Stubenberg.

Before the collision with the Earth, the meteoroid followed a heliocentric orbit with low eccentricity and low inclination to the plane of ecliptic (i.e. Earth’s orbit). In perihelion, the meteoroid was only slightly closer to the Sun than the Earth. In aphelion, it reached the inner asteroid belt (see Fig. 4). The meteoroid therefore originated in an inner belt of asteroids.

The searches for meteorites started shortly after we announced the fall area to our German colleagues the next day after the fireball passage. The effort on German side is mostly coordinated by Dieter Heinlein, who is a long-term collaborator of the European Fireball Network. A more detailed description of the fall area and the proposed optimal search strategy (related to the expected meteorite masses) was submitted to him on March 10. The first search in large group was performed on March 12. The search was successful shortly after the noon, when several fragments of total mass of about 45 grams (see Fig. 5) were found. They were evidently part of a single meteorite, which broke up at the impact. The total mass well corresponded to the expected meteorite masses at given location. The finders R. Sporn and M. Neuhofer were so kind to lend one 1.6 g piece to us for classification. The classification was performed by Dr. Jakub Haloda in the laboratories of the Czech Geological Survey. The meteorite was classified as an ordinary chondrite of type LL6, containing also a clast with achondritic composition. It is a breccia, i.e. meteorite composed from more types of material. The inner structure of the meteorite is shown in Fig. 6. Another fragment was classified by Prof. Addi Bischoff from the Münster University and it was also the LL6 breccia (link to the press release). The composition of meteorite confirmed its asteroidal origin. The unofficial name of the meteorite is Stubenberg.

At the present time, about 25 meteorites with instrumentally determined trajectory and orbit are known. In 15 cases, including the very first one, the Příbram meteorite of April 7, 1959, the trajectory computation was performed by the scientists of the Astronomical Institute of the Czech Academy of Sciences. Recently, meteorites Ždár nad Sázavou, which fell on December 9, 2014, were recovered on the basis of their computation.

Finally, we would like to thank for all reports of the fireball observation sent to us by casual witnesses of this extraordinary event. Fig. 1. Part of the all-sky image showing the fireball of March 6 obtained by the automatic digital all-sky fireball camera at the station of the Czech Hydrometeorological Institute in Kocelovice (photo: ASÚ AV ČR). 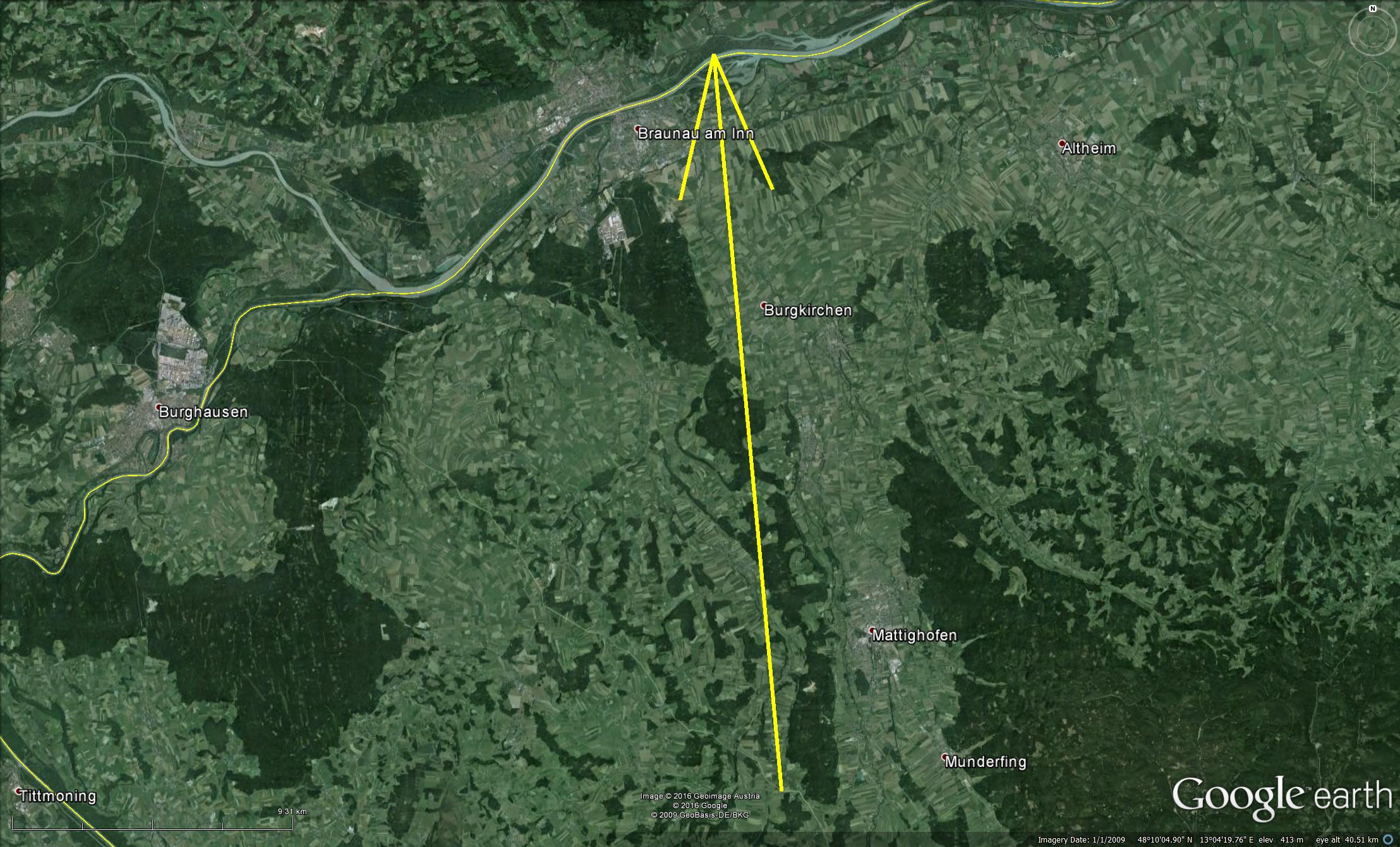 Fig 2. Projection of the atmospheric trajectory of the fireball to the Earth’s surface (yellow arrow).  The real length of the photographed trajectory was 72 km and was traveled by the meteoroid in 5.5 seconds. (photo: Google/Pavel Spurný, AI CAS) 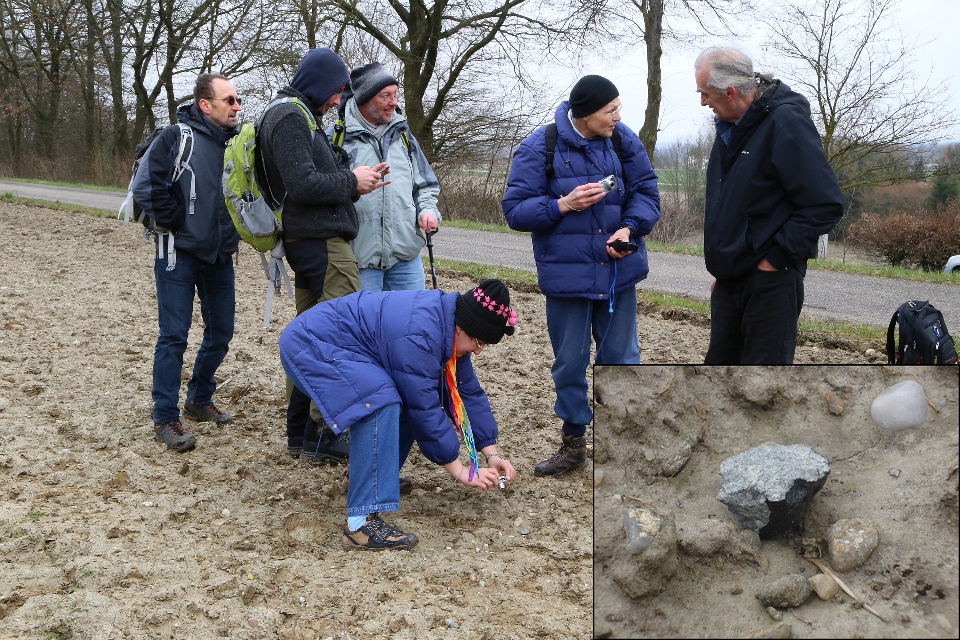 Fig 5. Overall view documenting the find location of the first meteorite  found on March 12 and detailed view of the largest piece of meteorite (23.9g) in the finding position SE from Stubenberg (photo: Hermann Koberger, Dieter Heinlein) Fig. 6. Internal structure of the meteorite corresponding to LL6 chondrites. White grains are meteoric iron, somewhat darker white grains are sulfides, light gray areas are olivines, darker grey grains are pyroxenes, and the darkest parts belong to feldspar. In the right low corner is picture of the inspected meteorite which was found by R. Sporn and M. Neuhofer (photo: Jakub Haloda)